Bloomland deftly tells the aftermath story of a shooting at a fictional southern university, following three characters and the larger community over two decades, and is told in a provocative, implicating second-person style point of view.

According to the publisher's official synopsis:

Bloomland opens during finals week at a fictional southern university, when a student walks into the library with his roommate's semi-automatic rifle and opens fire.

In this richly textured debut, John Englehardt explores how the origin and aftermath of the shooting impacts the lives of three characters: a disillusioned student, a grieving professor, and a young man whose valuation of fear and disconnection funnels him into the role of the aggressor. As the community wrestles with the fallout, Bloomland interrogates social and cultural dysfunction in a nation where mass violence has become all too familiar.

Profound and deeply nuanced, Bloomland is a dazzling debut that walks in step with We Need to Talk About Kevin and the novels of Denis Johnson, Rachel Kushner, and Tom McAllister.

Winner of the 2018 Dzanc Books Prize for Fiction and named an Indie Next Pick by the American Booksellers Association, Bloomland has received critical acclaim and been called a "Best of 2019" book by Kirkus Reviews and Electric Literature, among other places.

World Literature Today called the novel "a grim depiction of gun culture in the Bible Belt from a poignant and humanist perspective." Kirkus Reviews praised the novel as a "brilliant and insanely brave debut […] a culturally diagnostic achievement." And The Washington Post praised the novel's "existential command of the second-person perspective."

Englehardt is a writer and educator from the Pacific Northwest. He holds an MFA in creative writing from the University of Arkansas and currently teaches writing classes at Hugo House. His work has recently appeared in The Southern Review, Entropy and Vol.1 Brooklyn. He lives in Seattle with his wife and dog. 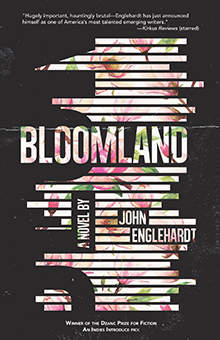