Raven Leilani has won the 20th award for Luster (Farrar, Straus and Giroux).

The VCU Cabell First Novelist Award honors an outstanding debut novel published in the preceding calendar year. Symbolized by a three-dimensional compass, the award is a tribute to writers who have navigated their way through the maze of imagination and delivered a great read, taking the reader someplace new.

Winning novelists have written books that may be funny or sad, sarcastic or heartrending, but each is powerful enough in its own way to have moved initial readers and final judges toward the conclusion that, among a field of roughly a hundred submissions annually, its writer has achieved something notable and enduring. 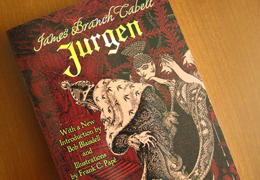 The award is named for Richmond writer James Branch Cabell, who achieved fame in the early 20th century through novels such as Jurgen, a sensationalistic historical fantasy.

How the Award Works

The VCU Cabell First Novelist Award is organized annually by the VCU Department of English and VCU Libraries.

The award contest, including screening and final judging, is overseen by the yearly appointed Cabell First Novelist Fellow, a third-year student in the MFA in Creative Writing Program. This is a rigorous process. During the fall semester, a nationwide call for submissions goes out, soliciting debut novels from publishers, editors, agents, and writers themselves. Because of the high volume of submissions, the first round of screening is a collaborative effort. MFA students and community readers read, review, and then rank all incoming novels. These rankings result in a long list of 20.

During the spring semester, the Cabell Fellow guides the MFA students through a second round of reading and discussion to reduce the long list to a short list of 10, which is then further reduced to three semifinalists. The last step in the process is the judging, which involves a three-pronged ballot. The MFA students, the First Novelist Committee, and the award winner from the previous year each have a single vote to determine the recipient of the award. In the case of a three-way tie, the vote defaults to the MFA students' selection.

VCU Libraries then organizes the annual event, generally held at James Branch Cabell Library, in which the winning author and others involved in the writing and publishing worlds, typically the author's agent and editor, appear at a public reading and Q&A session focusing on the creation, publication, and promotion of a first novel. Travel to and lodging in Richmond for the author and the additional speakers are provided, and the author receives a cash prize. 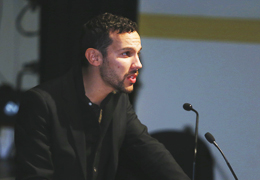 Winner Justin Torres reads from his novel, We the Animals, at the eleventh annual award event.

Winning novels are used as teaching tools for aspiring writers throughout VCU.